A Level Religion and Philosophy 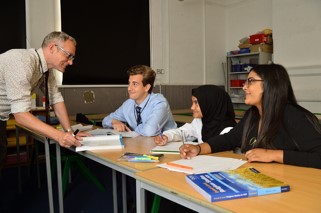 In an ever-changing world there have always been resolute constants in belief, culture, and religion that have provided the foundation to differing civilisations. When interrogating their philosophical framework, students comes face to face with the history of thought itself. They take part in conversations that encroach upon the philosophical queries that have echoed throughout the centuries. They extend their intellect in wrestling with the great questions of our and previous times pertaining to topics ranging from belief in God to existence itself. In its unique way, philosophy is like no other subject, as its reflexive approach turns a spotlight back on to the student, enabling them to learn about themselves as well as the world.

The Religion and Philosophy A-Level promotes enquiry. It gives the student the space and time to develop answers to searching religious, ethical, and philosophical problems. Does God exist? How do we know what is real? Are we made up of a body and soul? What are the cultural and/or religious roots to the status of women in society? What should be the role of business in our communities? How far should science be utilised in perfecting humans?

These are just fraction of the questions the curious students will be able to contend with.

Students explore the development of philosophical thought from the Ancient Greeks, in particular, Socrates, Aristotle and Plato, who engaged with the meaning of our existence to contemporary philosophers looking at the viability of an omnipotent God in the face of widespread evil and suffering. What about the practical issues of how our world in run? Well, ethics enables students to explore the question of how businesses are maintained and their responsibilities to wider society. What about religion? Here students will study Developments in Christian Thought giving them an overview of how the world’s most followed religion formed its character. From the latter students will gain greater understanding of how Christianity has influenced western civilisation since its inception.

Students who choose to undertake the Religion and Philosophy A-Level are usually aiming towards applying for Russell Groups universities. These are the universities recognised as being the best, not just in the UK, but for many, in the world. So why do they look upon Religious and Philosophy so favourably? Well, Philosophy and Religion students develop:

Strong Analytical Skills: Parsing different strands of knowledge and holding them up to the light; seeing a concept’s strengths and weaknesses; reading information and forming arguments with it, while using critical evaluative skills to show arguments as flawed or otherwise. Universities know that a student of Religion and Philosophy can effectively do all the above and more.

Enhanced Verbal and Written Communication: Long term learning of deep philosophical concepts will be displayed in the essays students of Religion and Philosophy will produce. Lessons promote verbal debate and argumentation so students are able to articulate their knowledge, analysis and evaluation.

Time Management – Universities see in the successful Religion and Philosophy A-Level student an ability to compartmentalize differing demands on their time and meet deadlines through using rigorous organisational skills.

Problem Solving – Urgent and profound ethical issues are tackled in Religion and Philosophy giving students the opportunity to provide real world solutions to real world problems. This process of thought, from theory to practice, impresses upon universities a students’ diligence and determination, their ability as a thinker, and finally, their capacity for skilled expression in written exposition.